Skip to main content
Roskruge Founding
Roskruge opened in 1908 and has served as an elementary, middle/junior, and high school. Since December of 1980 the building has been on The Arizona State and Federal Registers of Historic Buildings. In 1987 Roskruge expanded its K-6th neighborhood program to accommodate the Bilingual Magnet Middle School. 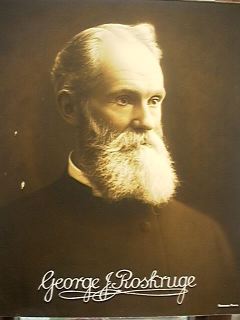 Excerpts from a TEA booklet by Mark Cesnik in cooperation with TUSD and Superintendent Dr. Thomas L. Lee. May, 1972:
History
Until the construction of the building which now stands in the middle of the square block of land bounded by East Fifth Street on the north, North Second Avenue on the east, East Sixth street on the south, and North Third Avenue on the west, the facilities for high school students in the Tucson Public schools were, at best, primitive.

Although there is evidence that high school work was being done in Tucson as early as the 1880's, there was no continuing program for such work until the rebirth of high school work in 1906. This is due partly to the fact that the young University of Arizona took most of Tucson’s grammar school graduates into it Preparatory Department. There was, because of the existence of the university's "high school," and the relatively small number of high school-level students in the city, no real need for Tucson Public schools to go into the high school business.

The city began to grow, however, and the need for a high school program grew along with it. The program, which has grown into the present Tucson High School, was born in 1906. At that time, the 47 students enrolled in the first-year high school program (those students in more advanced work were still accommodated at the University) began classes in the "Plaza School."

"High School Life," the newspaper for and by the students, reported in the issue of June, 1907, that the conditions there were less than conducive to study. The high schoolers shared the facilities, according to the paper, with about 900 elementary pupils. The students complained, "While we were in school, these pupils have two recesses each day, with the usual noise of games and passing to and from the building so that we were unavoidably disturbed."

So disturbed were they, the paper records, that after a one-month stay there the students were moved to "The Little Adobe School House." That building, located about seven blocks from the university, was their home until the completion of what is now Roskruge Junior High and Elementary School. "The Little Adobe School" was a building of two rooms. The larger adobe room served as a lecture hall with the frame addition serving as laboratory space. It was here that Mrs. Anne E. Rogers and her assistant, Miss Anna Thompson, taught Tucson's high school students for the bulk of that first year.

This facility proved almost as bad as the first. It wasn't noisy. Quite to the contrary it was so peaceful that the editors of the student newspaper complained, "This too has its disadvantages. It is poorly located, being entirely off the car-line and outside the city limits."

Compounded with the "disadvantage" of being so far from civilization (seven blocks from the university), was the problem of weather. Two rooms for 47 students and two teachers, without the benefit of central air conditioning, was close quarter in the Tucson heat. If rains came to give relief from the heat, it proved only to be a mixed blessing. The frame addition leaked so badly that all the students and their teachers were forced to take sanctuary in the one adobe room.

On the fifth day of March, 1907, the School Board of Trustees of Tucson District Number One took action to rectify this rather bad situation. At their meeting of that date the Board voted to recommend to the voters a bond issue to finance the construction of the first high school building in the district. The voters were eager to approve the measure and at a special election on April 6, 1907, the issue passed 221 to 3. The contract for construction was awarded to D.A. Evans for a low bid of $37,422. The proposal approved by the voters exactly as recommended by the Board, called for the issuance of $50,000 in 20-year bonds at an annual interest rate of four per cent.

"The Tucsonian," the high school newspaper with a new name, reported the details of the building project in December of 1907. The main part of the building was to measure 164 feet by 58 feet. It was to be a three-story structure. In the basement was a 14-foot wide corridor which was "to be used as the armory for the military department." There were to be eight rooms on that level. Four were designated as "domestic science" rooms with space for sewing, cooking, and laundry. The other four rooms would accommodate the "manual training" program. There was space for carpentry and machine chips and one lecture room. The basement also was to house the gymnasium, a 30-foot by 60-foot room with a connecting stairway leading to the stage of the Assembly Hall which was located directly above.

The Assembly Hall was the major feature of the first floor. Measuring 60 feet by 65 feet, it was designed "to hold almost as many persons as the Tucson Opera House." Sharing that floor were the administrative offices. These offices housed the Superintendent, the Principal, and the supervisors of the primary, music, and drawing departments. Also on the first floor were four large classrooms and one room "which will be used for teachers' meetings," according to the student paper. On the second floor there were to be laboratories and lecture rooms for the science departments.

Scheduled for occupancy at the beginning of the 1907 school year, the building suffered from what is now an even more common problem – delays in construction. The December, 1907 issue of "The Tucsonian" stated, "The building is progressing rapidly. The walls are up and they are putting on the roof. But we do not expect to occupy it till March or April (1908). The Assembly Hall will not be completed in the interior for six months or a year on account of the tight money market."

The building's cornerstone was laid on October 25, 1907, according to the Masonic ritual, placing it in the northeast corner of the structure. The cornerstone was a copper box containing a photograph of Superintendent Ruthrauff, a complete list of all the city’s school teachers and a record of all subjects offered for study, a bundle of cards signed by members of the School Board, the mayor, members of the Board of Supervisors, and City Councilmen. It also contained a copy of the course of studies for Arizona schools as adopted by the Board of Education, the Arizona school laws as published in July, 1907, a copy of the by-laws of the Arizona Pioneers Historical Society, the names of prominent citizens, a copy of a blank application for a money order, and copies of The Arizona Daily Star, The Tucson Post, and The Tucson Citizen.

The anticipation of a new, modern home was a source of great pride for the high school students. "The Tucsonian" recorded the favorite cheer of the day: "Chee-he, chee ha, Chee-ha-ha-ha, Tucson High School, rah, rah, rah."

By the time that the building was occupied the enrollment had mushroomed. Added to the 47 students of the class entering in the first year of the high school program were 104 students entering in 1908. The staff of teachers and administrators grew along with the student enrollment. The December, 1907, "The Tucsonian" listed the faculty of the high school as consisting of W.M. Ruthrauff, Superintendent, O.E. Kuhn, Principal and teachers Jean Newcomer, J.F. Atkinson, Nettie M. Cook, Nettie Goodman, Hariett Vail, and Frances Goodin.

The source of much of this information, "High school Life" and "The Tucsonian," grew into what is now the yearbook of Tucson High School. Volume One, number one, of this publication appeared in November, 1906, under the management of Walter E. Lovejoy, Editor-in-chief, and Leonard H. Brooks, Business Manager. It was subtitled "A Journal Devoted to High School Interest" and was offered for sale at 10 cents per copy or 75 cents per year.

As the city continued to grow and the student population of the district climbed, it became apparent to the School Board that additional construction was needed. On November 9, 1913, The Board voted to recommend another bond issue to the voters of the district. This would finance an addition to the existing high school building to accommodate the ever-increasing number of elementary school students in the city. The measure called for $45,000 in five and one-half per cent, 20 year bonds. The voters again saw eye-to-eye with the Board regarding the need for more schools passing the issue by a vote of 192 to 17 at a special election on December 6, 1913.

Reed and Dow won the contract for construction of the new elementary school for a low bid of $22,828. The bid was for construction of a 12-room addition to adjoin the high school. The rooms were to accommodate between 45 and 52 students each and an assembly hall with a seating capacity of 125 was to be included in the structure. The remainder of the money was used to provide steel fire escapes for other buildings in the district and for the installation of central heating and plumbing facilities and equipment for the new elementary school.

This new school did not come by its name easily. In his history of the first century of Tucson School District Number One, The First Hundred Years, James F. Cooper records the naming of the school: At the time of the awarding of the architect's contract, the Board, composed of Dr. W.V. Whitmore, John B. Write and George J. Roskruge, took under consideration the naming of the new elementary school. The minutes of the board report that "The question as to a name for the new grammar school building then came up and it was moved and seconded that the same be known as the 'Roskruge School.'" The modest and well-regarded Roskruge protested and according to reports of Tucson residents of that era, he stalked from the meeting room. Whitmore and Write voted for the Roskruge name in Roskruge's absence

The architect winning the contract for design and specifications for the Roskruge School was Henry O. Jaastad.

The major piece of new construction during the period came in 1923. After considerable controversy over a location (so much so that the School Board held a special election to leave the choice in the hands of the district voters) the present main building of Tucson High School gained life. On November 12, 1923, the cornerstone was laid for the structure designed to accommodate 1,500 students with a price ceiling of $650,000 for construction. With the completion of the new facility in 1924, the original building became solely used as Roskruge Junior High and Elementary School.

It was in April of 1931, 10 years and three days after the appearance of the story in the Star about the unsafe conditions at the school, that the voters went to the polls to pass a bond issue to finance improvements in the building. The election came after much work by Superintendent of Schools C.E. Rose to get the measure approved and a front-page article in the Star in support of the issue.

Further improvements and additions were made in 1950 to bring the building to its present state. No major renovation had been done on the physical plant since that time.

Salome Townsend, the first principal of the Roskruge Junior High and Elementary School after the building was relieved of its function as home for Tucson High school, serving more years as principal there than any other individual. Serving through the 20's and 30's Miss Townsend was the school's chief administrator until her retirement in 1947.
© Copyright 2021  |  Terms of Use  |  Privacy Statement  |
Log in